SWMM is a dynamic hydrology-hydraulic water quality simulation model. It is used for single event or long-term (continuous) simulation of runoff quantity and quality from primarily urban areas. The runoff component operates on a collection of sub catchment areas that receive precipitation and generate runoff and pollutant loads. The routing portion transports this runoff through a system of pipes, channels, storage/treatment devices, pumps, and regulators.

SWMM tracks the quantity and quality of runoff made within each sub catchment. It tracks the flow rate, flow depth, and quality of water in each pipe and channel during a simulation period made up of multiple time steps. SWMM also models the hydrologic performance of specific types of low impact development (LID) controls.

This is the last public version of the older SWMM4 available. Posted by Dr. Wayne Huber from Oregon State University, it contains a number of improvements and additional capability (including larger array sizes). Earlier releases of 4.4 are also provided. For more information please click here.

Posted by Dr. Wayne Huber from Oregon State University, it contains updates and bug-fixes not included in the official SWMM4 release below.

This version is the official release of the older SWMM4 program, but it's somewhat out of date. The zipped file contains the self-installing program, support files, example files, and release notes.

Beginner or seasoned user, our flexible training options help you understand and master the full capabilities of PCSWMM. 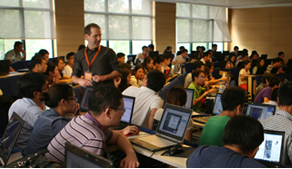 Sign up for our monthly newsletter to keep informed on new journal papers, SWMM discussion, university research and PCSWMM development.

Thanks for signing up for the SWMM newsletter, you will hear from us soon!

Download failed
Get started today for free.
Find out how easy PCSWMM is to use and how it can help you on your next project. Your free 30-day trial comes with step-by-step tutorials and hands-on exercises.
GET STARTED FOR FREE

Get started with your free trial.
Access to your 30-day full version of PCSWMM Professional 2D will follow once your information has been verified.

Thank you for making the time to evaluate PCSWMM. Please note that trial license requests are typically processed Monday to Friday from 8 a.m. to 4:30 p.m. EST.

You will receive an email with your PCSWMM Professional 2D trial license download details once your trial has been approved.

Please also note that if you are affiliated with an educational institution, you must apply for a CHI educational grant instead of a trial license.

Inquire about a free webinar today.
Speak with an engineer about customizing a webinar to suit your water modeling needs.

Thank you for contacting us. Please note our office hours are Monday to Friday from 8 a.m. to 4:30 p.m. EST.

One of our friendly staff member would be soon in touch with you.

Ask an engineer today.
Have a question? Our team of professional engineers is happy to help.

Thank you for contacting us. Please note our office hours are Monday to Friday from 8 a.m. to 4:30 p.m. EST.

One of our friendly staff member would be soon in touch with you.